As said before, physicists prefer to use the joule, or watt second, as their energy unit. This is the standard unit for scientific purposes. Another unit is the erg, equivalent to one ten-millionth (0.0000001) of a joule. This is said to be roughly the amount of energy needed by a mosquito to take off after it has bitten you (not including the energy needed for the bite itself). The erg is used in lab experiments involving small amounts of expended energy.
You have probably heard of the British thermal unit (Btu), equivalent to 1055 joules. This is the energy unit most often used to indicate the cooling or heating capacity of air-conditioning equipment. To cool your room from 85 to 78 degrees needs a certain amount of energy, perhaps best specified in Btu. If you are getting an air conditioner or furnace installed in your home, an expert will come look at your situation, and determine the size of air conditioning/heating unit, in Btu, that best suits your needs. It doesn’t make any sense to get one that is way too big; you’ll be wasting your money. But you want to be sure that it’s big enough—or you’ll also waste money because of inefficiency and possibly also because of frequent repair calls.

Physicists also use, in addition to the joule, a unit of energy called the electron volt (eV). This is an extremely tiny unit of energy, equal to just 0.00000000000000000016 joule (there are 18 zeroes after the decimal point and before the 1). The physicists write 1.6 × 10–19 to represent this. It is the energy gained by a single electron in an electric field of 1 V. Atom smashers are rated by millions of electron volts (MeV) or billions of electron volts (GeV) of energy capacity. In the future you might even hear of a huge linear accelerator, built on some vast prairie, and capable of delivering trillions of electron volts (TeV).
Another energy unit, employed to denote work, is the foot pound (ft-lb). This is the work needed to raise a weight of one pound by a distance of one foot, not including any friction. It’s equal to 1.356 joules.
All of these units, and conversion factors, are given in Table 1. Kilowatt hours and watt hours are also included in this table. You don’t really need to worry about the exponential notation, called scientific notation, here. In electricity and electronics, you need to be concerned only with the watt hour and the kilowatt hour for most purposes, and the conversions hardly ever involve numbers so huge or so miniscule that you’ll need scientific notation. 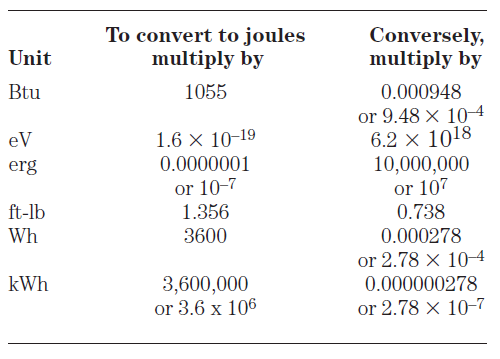