If a conducting or semiconducting path is provided between two poles having a potential difference, charge carriers will flow in an attempt to equalize the charge between the poles. This flow of electric current will continue as long as the path is provided, and as long as there is a charge difference between the poles.
Sometimes the charge difference is equalized after a short while. This is the case, for example, when you touch a radiator after shuffling around on the carpet in your hard-soled shoes. It is also true in a lightning stroke. In these instances, the charge is equalized in a fraction of a second.
The charge might take longer to be used up. This will happen if you short-circuit a dry cell. Within a few minutes, or maybe up to an hour, the cell will “run out of juice” if you put a wire between the positive and negative terminals. If you put a bulb across the cell, say with a flashlight, it takes an hour or two for the charge difference to drop to zero.

In household electric circuits, the charge difference will essentially never equalize, unless there’s a power failure. Of course, if you short-circuit an outlet (don’t!), the fuse or breaker will blow or trip, and the charge difference will immediately drop to zero. But if you put a 100-watt bulb at the outlet, the charge difference will be maintained as the current flows. The power plant can keep a potential difference across a lot of light bulbs indefinitely.
You might have heard that “It’s the current, not the voltage, that kills,” concerning the danger in an electric circuit. This is a literal truth, but it plays on semantics. It’s like saying “It’s the heat, not the fire, that burns you.” Naturally! But there can only be a deadly current if there is enough voltage to drive it through your body. You don’t have to worry when handling flashlight cells, but you’d better be extremely careful around household utility circuits. A voltage of 1.2 to 1.7 V can’t normally pump a dangerous current through you, but a voltage of 117 V almost always can.
Through an electric circuit with constant conductivity, the current is directly proportional to the applied voltage. That is, if you double the voltage, you double the current; if the voltage is cut in half, the current is cut in half too. Figure 1 shows this relationship as a graph in general terms. But it assumes that the power supply can provide the necessary number of charge carriers. This rule holds only within reasonable limits. 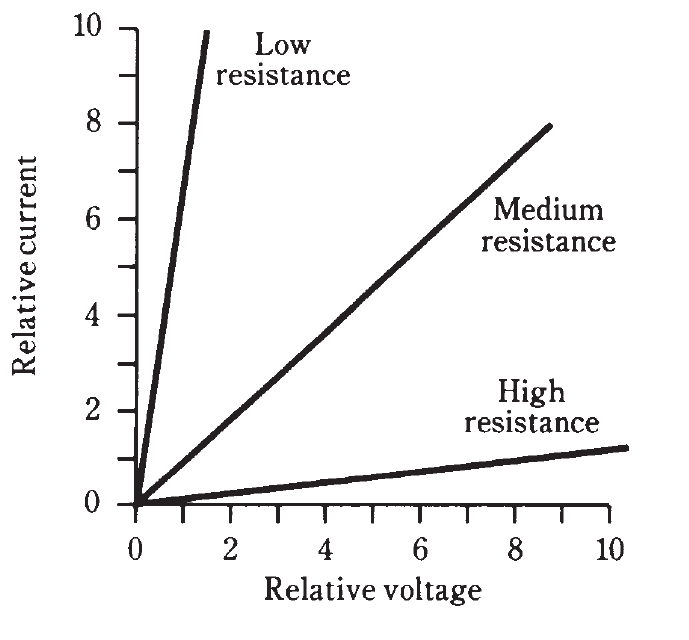 When you are charged up with static electricity, there aren’t very many charge carriers. A dry cell runs short of energy after awhile, and can no longer deliver as much current. All power supplies have their limitations in terms of the current they can provide. A power plant, or a power supply that works off of the utility mains, or a very large electrochemical battery, has a large capacity. You can then say that if you cut the resistance by a factor of 100, you’ll get 100 times as much current. Or perhaps even 1000 or 10,000 times the current, if the resistance is cut to 0.001 or 0.0001 its former value.